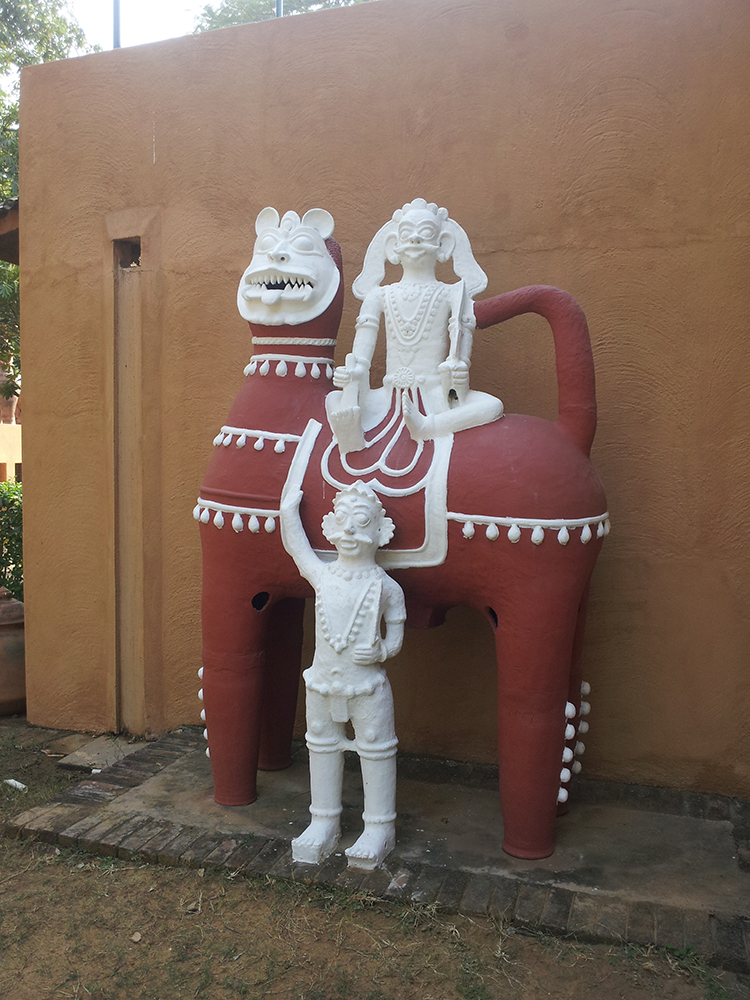 I was given the opportunity to travel to Delhi, India for a 2 month artist’s residency until December 2013 with 3 other Alumni from The Prince’s Drawing School. This included a teaching position at the International Institute of Fine Arts in Modinagar (2 hours outside of Delhi) as well as travelling to Manali which is on the tip of the Himalayas. This is the first of five posts documenting my experiences.

From Day 1
We arrived in Delhi International airport on the 29th October. A driver picked us up and we were taken straight to Sanskriti where we would be taking turns to use the studio space. Through the car window I could see dusty roadsides where people had built structures to live and sell things from as well as businesses selling bamboo ladders and brightly painted pots. The number of different types of vehicles I could see was also a major difference with additions of auto rickshaws, cycle rickshaws and bicycles carrying giant loads of sacks or metal rods sticking out far behind them.

Sanskriti was a oasis of calm. It has museums and artists’ studios set in a beautiful garden which is constantly being changed and improved upon.  There are three museums on site which spill out onto the garden, The Museums of Everyday Art, Indian Terracotta and Textiles. Sanskriti was a great place to meet and talk to other artists and exchange information about Delhi and India. On our first day we walked along the main road from Sanskriti to Arjangarh metro station on the yellow line. On the way I saw my first cow hanging out at the edge of the road. The metro in Delhi is clean and efficient. No alcohol is allowed into the station and there are scanners at the entrance where bags and people are scanned. There are also two carriages at the front of every train just for woman. I don’t really agree with this system as it encourages segregation but you could almost always get a seat in these carriages.

We first got off at Rajiv Chowk and experienced our first scam of the trip. A lot of auto rickshaw drivers want to take you to bazaars where they receive commission for bringing you. The auto driver told us that Jantar Mantar where we were heading was closed because of a political rally and the market next it that we wanted to go to had closed down. They wanted to take us to a bazaar instead. We insisted that they take us anyway and found both were there and open.

Jantar Mantar is a collection of architectural structures set in a quiet garden. The buildings are astronomical instruments built in 1700′s. I found it a bit strange to look at real structures that could have been invented by myself in my drawings. We walked back towards Connaught Place to the National Museum of Modern Art along what I think was Janpath Market. We managed to get an entourage of people trying to sell us stuff including one selling a drum and another a whip. We were shown around Delhi on this day by Australian artist David Rossiter who introduced us to a girl selling beads he had drawn a portrait of on a previous visit. You can see his portraits entitled All Star Cast here

Our next aim was to reach Purana Quila which is an old fort although we accidentally stumbled upon another ancient monument on the way. Masjid Khairul Manzil is an old mosque still in use although the outer walls are no longer fully intact. It seemed to be guarded by two cats who met us at the entrance. Our next aim was to reach Purana Quila which is an old fort although we accidentally stumbled upon another ancient monument on the way. Masjid Khairul Manzil is an old mosque still in use although the outer walls are no longer  fully intact. It seemed to be guarded by two cats who met us at the entrance. Purana Quila is an old fort, parts of it are in a crumbling state with whole sections missing. I love seeing through the structure of a building in this way. I felt as though I was banking information for later use. Parts of the brickwork had disintegrated before the mortar.

6 of us piled into an electric auto rickshaw back to a metro station. These are a new thing in Delhi and the normal auto’s seam to have a grudge against them. With 6 of us piled in it was incredibly slow going. A girl started dancing to a drum at the traffic lights. This is apparently a common routine for young girls to dance with a ring. The finally is for them to dislocate there arms so that they can fit through it. The next day we headed to the old Delhi Bazaars. I felt far more relaxed in this chaotic mishmash of stalls down winding streets where less people seemed to take any notice of us. The bazaars are separated into different areas of specialities including cloth and car parts and paper. We went to the paper section were we bought sketchbooks for 90p each. This was a place I definitely wanted to come back to and explore further. It was difficult to walk down the main streets in this area. Cycle rickshaws and  people carrying huge loads going back and forth as well as motorbikes beeping you from behind. The noise of beeping never seams to let up in any part of India.